A dictionary attack is a guaranteed method for cracking password databases. The primary value is the fact that passwords can be precomputed, stored on disk, and distributed for later use.

However, dictionary attacks are very expensive, requiring resources beyond the capabilities of most potential attackers. They take a long time to do, and they require enormous storage resources. Because of the space constraints, even attackers who have these resources cannot easily share cracked databases.

This document describes an alternative attack that still requires large amounts of time, but allows attackers to share password databases in a compressed form that uses less space, making sharing feasible. Such compressed databases enable other attackers with fewer resources to crack passwords. In the real world, such compressed cracked databases are sometimes sold on the black market.

We assume the following:

In a dictionary attack, we are saving guessed passwords.

The form of a dictionary is the following:

How do we obtain a dictionary? As long as we know the algorithm used to hash passwords, we can compute a hash for any given plaintext password. We usually obtain plaintext passwords by systematically enumerating them. After hashing, pairs of plaintexts and hashes are stored a table, hash first, and in sorted order. Later, when we need to “crack” a password found in a password database, all we need to do is find the password by looking up its hash in the table.

Although precomputation is quite expensive, the cost for a lookup is \(O(\log n)\), because we can do a binary search on a sorted password database.

There’s a big tradeoff: we need to store all of those passwords. For an 8-character password composed only of the 36 lowercase alphanumeric characters, there are \(2.8 \times 10^{12}\) possible passwords. That corresponds to roughly 20 TB of data for a relatively weak password scheme!

Therefore, there are two problems:

Hopefully, this example helps you appreciate the importance of having long passwords drawn from a large set of possible characters.

Before hash chains, if you wanted to crack a password database of size \(n\), for a password scheme having \(m\) possible passwords, you had two options:

In short, the intuition is to store only \(O(\frac{m}{k})\) passwords. You store no hashes. The hashes and the passwords that are not stored can be generated again on the fly.

Let’s look at a dictionary again:

Suppose we have the following ingredients:

As a thought experiment, suppose \(r\) were the following ideal function:

Then we can do the following interesting things:

To make this clear, let’s look at an example. Remember that our goal is to precompute hashes for all passwords.

To be clear, from a given password, we can compute a hash chain of the following form:

The following diagram shows an idealized relationship between passwords and hashes (notice that there are no collisions). Also, note, this diagram is intended to convey the intuition, so it does not perfectly represent the problem. 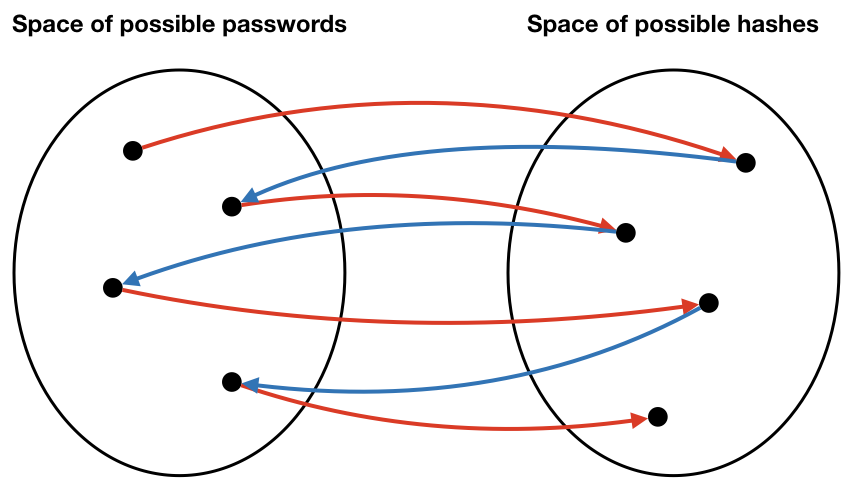 Although we can generate all passwords and hashes from a single “seed” password in this example, it doesn’t buy us anything special. After all, if we spend \(O(m)\) time to generate a datastructure that later requires \(O(m)\) time for lookups, we have wasted our time. The interesting part is when you “snip” hash chains. For example, let’s divide a chain into pieces of length 4, and only store the beginning and ending passwords for each piece. This “snipping size” is the meaning of the parameter \(k\) that we described earlier.

To be clear, each row consists of only a pair of passwords. Nevertheless, we can reconstruct all of the missing passwords.

For reasons you will see in a moment, let’s store our smaller chains the other way around. We will also keep them sorted by the password on the left side.

More generally, \(k\) is the length of the chain we want to “snip.” You may not realize it quite yet, but we’ve just created a password database that’s much smaller while implicitly storing the same information. This is true even though this data structure contains no hashes of any kind.

In the diagram below, suppose one of the hash chains in the table is the set of points inside the dashed green oval. If we discover that a hash is in this chain, we only need to search inside this one chain. 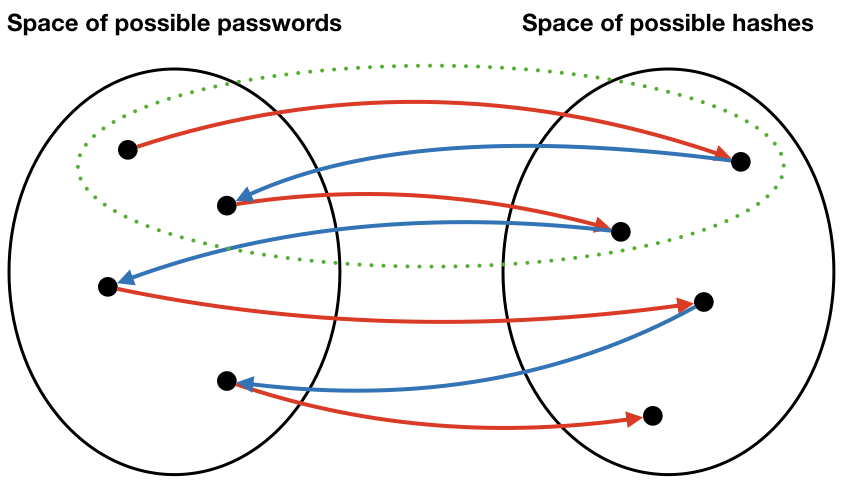 Another chain is in the next diagram. Notice that the two chains are non-overlapping. Therefore, we really can limit our search for keys to just the one chain where we found it. 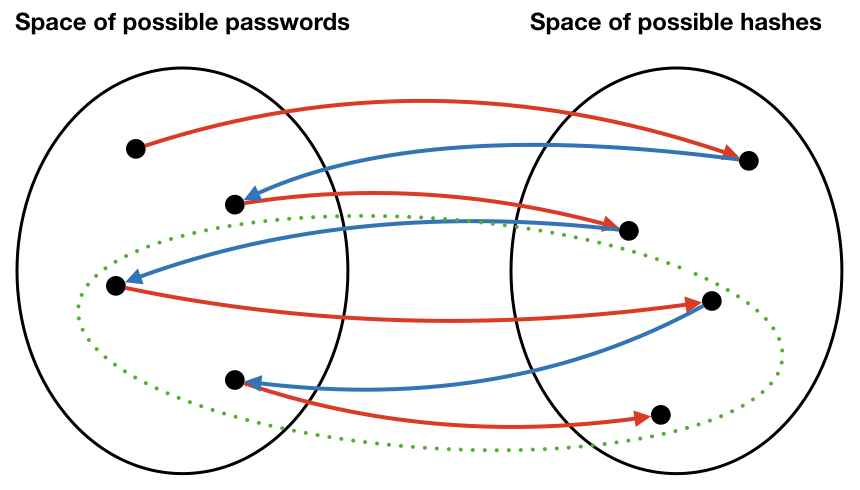 The genius of this odd data structure starts to make sense once you use it. Suppose we’re looking for the plaintext for cipertext \(c_5\). Refer to the table above.

To be clear, here’s the algorithm:

A few more things to note:

In the real world, we do not have perfect reducers like the kind described here. The ideal reducer described above allows us to crack an entire password database because it provides a one-to-one correspondence between hashes and plaintext passwords, and it also allows us to cover the entire password space by repeated hashing and reduction.

Although it is possible that real reducers with the above properties exist, they are most definitely hard to find. But, surprisingly, for this technique to be useful, it is not necessary to have a perfect reducer. Imperfect reducers can often crack large proportions of password databases.

A good example of an imperfect reduction is to simply take the first few characters of a password hash as a password. For example, given the password hash

we could apply a reduction that returns

This somewhat harebraned scheme is the one we use for our password cracking lab, and as you will see, it works shockingly well. The reason is that an important design goal of a cryptographic hash function is to uniformly distribute hash values. Therefore, if a reduction can be found that can convert uniformly-distributed hashes into uniformly-distributed plaintexts, a large proportion of the password space can be explored.

Oddly, one “countermeasure” against precomputed hash chain attacks is to use a cryptographic hash function that has collisions.

Notice that after applying the reduction function to \(c\), the two chains are the same. Because the two passwords share a ciphertext, their two chains “merge”. Since our algorithm assumes that chains never merge, we have to discard one of the branches of the chain in order to store it in our database. We will lose the ability to decrypt any of the passwords in the discarded chain. If \(k\), our chain length, is a large number, we will lose many passwords, and if \(k\) is small, we will lose fewer.

Although you might view hash collisions as a countermeasure against precomputed hash chain attacks, no crypto designer in their right mind would intentionally introduce design a hash function that produces collisions, since it also weakens other properties of cryptographic hashes. Nonetheless, real cryptographic hash functions are guaranteed to collide (unless they are perfect), so hash chain attack implementations must deal with this contingency.

A rainbow table is a special kind of precomputed hash chain that is more robust—though not immune—to hash collisions. The paper, Making a Faster Cryptanalytic Time-Memory Trade-Off by Philippe Oechslin, describes this improved design.